Today is a special day for League Crawler!  For the first time ever, we are proud to take a few moments out to recognize a League of the Year from our community.  League Crawler is all about providing a place for like minded players and commissioners to find one another, promote their leagues, recruit and collaborate.  Along the way we’ve run into some really great people and have been impressed with what kind of quality is out there in the Madden community.  See, it’s easy to start a league, get friends, give it a name, purchase a daddyleagues subscription.  What isn’t easy is being so dedicated to a craft that people buy in.  Commit.  Be dedicated.  Be loyal.  Most leagues fail almost overnight.  For you the aspiring league player, it can be difficult to know which league to invest your time in.  That sentiment is precisely why League Crawler exists.

The mission of League Crawler – Connecting the Best People with the Best Leagues – is the reason we’re finally ready and very, very proud to name a League of the Year!

Last week, I sat down with the the commissioner of MBL, Bomber and co-commissioner, Lip from MBL and discussed everything from how MBL is and has been so successful, to what they think about the direction of Madden, rules and enforcment, development leagues, partnering with other heavyweights in the Madden community like Shopmaster and his #CFMMovement as well as working with other leagues to help them become more successful.  What I found out really quickly from these guys is, they aren’t just two guys that put this thing together overnight.  MBL is the real deal folks.  Just ask them.  They aren’t playing around when it comes to their trademark “Full Immersion” and “August to August” approach to running a CFM league.  Yes, you heard that right – August to August.  But wait, don’t most leagues slow down and disperse in the summer when it’s warm and everyone is playing MLB The Show?  Not these guys.  Check out what they had to say about keeping guys engaged during what is traditionally a down time for Madden:

Notice they talk a lot about “The Grid”.  This is their development league which serves to filter through guys that aren’t serious about playing and following the league’s rules.  Ask any commissioner out there, it’s tough to find good guys!  Before you know it, a guy can join and wreak a lot of havoc in a league through dropping players, bad behaviour, trades, etc.  The Grid is set up to figure out what these guys are before the join the Big League.  Guys at this level of MBL involvement are still playing games, but they are proving themselves by being active in chat, posting content on their team’s MBL Twitter page, among other things.  This approach is good for everyone because it protects the members in the Big League from incoming owners that can, as I said before, cause of lot of drama and chaos in the league very quickly depending on they behave.  Knowing a guy is legit up front is the key to that and MBL’s The Grid development league is a fantastic idea and a great one to emulate for any aspiring league out there.

What about the recruiting process and type of guys MBL attracts?  Well, MBL is finally getting big enough that active recruiting isn’t really something they are doing.  I asked them if guys are coming to them and the answer is yes.  That said, read the rules and basic setup before you even come knocking.  In the future, MBL is considering making a part of their process, learning some of their rich history before asking to join.  Why?  Because guys don’t read.  If you’re trying to join MBL and you choose not to read the rules and immediately start doing things that are counter-cultural to what MBL is all about, then chances are, MBL isn’t the league for you.

What about Social Media?  Content?  I asked the MBL guys about that since, if you’re not following them on Twitter you don’t know how aggressive their marketing campaign is.  These guys are churning out content like they are ESPN.  They do stuff that I’ve never seen or heard of a league doing before along with Fan Favorites like their podcast.  Side Note – their podcast isn’t just about their league and their guys calling in and talking about the games.  They are having guys like Shopmaster @shopmaster on Twitter come on and be a part of the show too.  Really cool stuff to have a legend like that who does so much for the Madden community come on their podcast.  So, what else do they do?  They have a Magazine that has content about their league, but even cooler than that, these guys have a whole network dedicated to covering their league in an in-depth way.  What great is, the people that are doing this stuff are people that are passionate about MBL, not just the commish.  MBLN is MBL’s ESPN type network where they do video highlights, updates, in-depth analysis on a team and how they are doing.  The coolest thing is the have Play by Play for some of their league games.  Did you hear that?  Play by Play.  Don’t believe me?  Check this out:

Certain games each league week get selected to be broadcast on Twitch with MBL personalities calling the game in real time.  This is so cool.  With football season over, having a real broadcast team that is a part of the league calling the game is really, really cool.  I’m not even in their league and have watched two of the games.  Cheers to MBLN and all of the guys there that put this work together.  Truly next level stuff here and a benchmark for the Madden community on how to get guys involved.  It takes work but, MBL has found some awesome people to run this part of the league and they are knocking it out of the park with the content they are generating.

Guys, there is so much to love about what MBL is doing – without question, they are the real deal.  I love what they are doing with MBLN and their media content but I also love how they utilize Twitter to keep their members involved.  One of the things we talked about was how to keep people active in the summer when the real Super Bowl has been over for a few months, guys are being courted by other games like MLB The Show to abandon Madden for.  This season of the year can be tough on leagues but MBL isn’t losing anyone during these times.  Their guys are engaged because, in part, they want to be.  Being a part of the Big League in MBL is something to strive for, something that is so special that it’s worth toiling away in The Grid long enough to get called up. 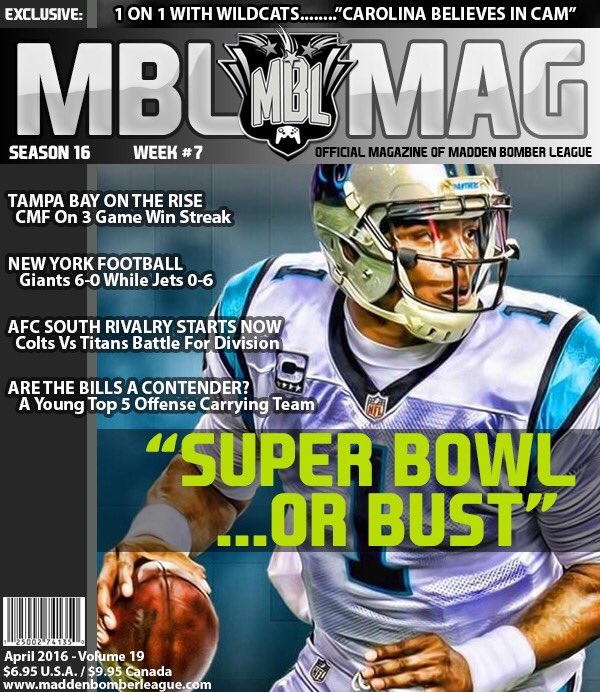 There is so much more to find out about with MBL and more than we can get into here.  Me and the commissioner and co commissioner from MBL talked for abot an hour about what they’re doing and it’s really worth a listen.  The full interview is posted below.  As you’re listening to the interview, i want you to notice a few things.  One – these guys are serious about this league.  This isn’t a Facebook League folks.  These aren’t MUT re-treads and scrubs.  These guys aren’t folding and bending/breaking rules for anyone.  Second – they are passionate about MBL.  They love this league and they love the guys they have recruited to be in their league and proud of what they’ve accomplished.  They’ve created a network of people that share their passion for this league and they aren’t going anywhere.  The last thing to point out is that they aren’t just involved with themselves either.  They are into making things better for the community too.  They have decided to take up Shopmaster’s hashtag on Twitter #CFMMovement which is trending abd being noticed by developers.  The squeaky wheel gets the grease and Shopmaster is been squeaking about CFM/Franchise mode for a LONG time.  #CFMMovement is an extension of his passion and it’s cool that MBL is using their influence and reach to advance that cause.

So, in closing, I want to raise a glass and congratulate MBL fr their accomplishments.  They are the Benchmark for 2016 and for that I am proud to announce MBL as League Crawler League of the Year!

Want to know more about them?  Check out their Daddy League page here – http://www.daddyleagues.com/mbl

Recent Posts From Our Community: